Sean Araneda, a.k.a. The 3D Print General, wrote up a new 2019 list of the times 3D printing appeared in movies. Check it out!

For some, 3D printers are still considered as machines coming straight out of a sci-fi movie. But who said that’s not the case sometimes? As the big movie fans we are, we put together a list of movies that we’ve seen (and remembered) that feature a 3D printer or have a 3D printer cameo.

Check out our selection of 11 times 3D printers made it to the big screen! 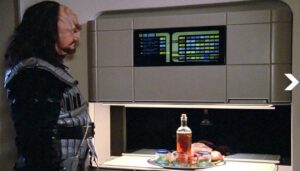 The one 3D printer to rule them all.

The Replicator may just be the most famous 3D printer of all time. Some may argue that The Replicator is not exactly a 3D printer, as it uses instantaneous materialization instead of modern 3D printing techniques. However we believe that a machine like this should definitely be included in our list, since it was the first food 3D printer to be featured in a movie.

Fun fact: this world-famous machine inspired the name of the Makerbot Replicator, a famous desktop 3D printer that was once seen as the “Macintosh” of 3D printers.

Darkman is an awesome movie, but it’ll never be as good as Darkman III.

Darkman was the first movie to feature 3D bioprinting when Liam Neeson, a.k.a. Darkman, used a 3D printer to print skin and disguise himself as Pauly.

One of the most iconic sci-fi films of all time from the French director Luc Besson features a massive 3D bioprinter that was used to 3D print Leeloo (Milla Jovovich). OK, it’s not as cool as the diva dance opera, but still– 3D printing an entire body looks pretty cool to us.

Note: Actually, although they’re not as advanced yet, 3D bioprinters actually exist!

90’s kids (and not only) will probably remember this movie, where missile technology is used to enhance toy action figures. The result is an all-out battle between kids and action figures. In the opening scene, Globotech Industries uses some kind of an SLA 3D printer to create the toy figurines.

In Jurassic Park III, Grant’s apprentice uses a 3D printer to create a replica of a velociraptor resonating chamber, which is later used to communicate with the raptors on the island. However, we’re not entirely sure that a mere plastic larynx would be sufficient of producing sounds able to command a herd of angry raptors.

Note: You can print your own velociraptor resonating chamber on Shapeways for $37. 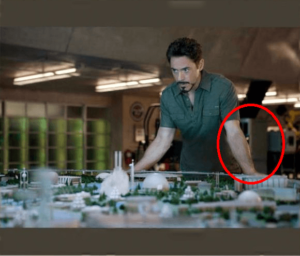 If Tony Stark doesn’t own a 3D printer, then no one should. In Iron-Man 2, a Dimension Elite from Stratasys can be spotted behind the Marvel superhero. Our guess is that Tony Stark used this FDM 3D printer to 3D print his father’s “City of the future”.

In this 2012, Jackie Chan uses a really fast FDM 3D printer to replicate a mask in almost real time thanks to a pair of 3D scanning gloves. 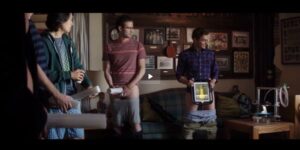 In this Seth Rogen/Zac Efron comedy movie, a Deezmaker Bukobot is used by a fraternity to 3D print a– to put it lightly– male body part. 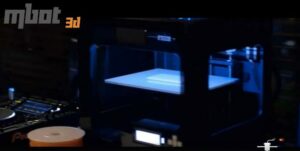 In Knock Knock, an Eli Roth horror-thriller movie, an Mbot 3D printer by Magicfirm can be seen behind a DJ mixer inside Keanu Reeve’s house. The movie might not be that good, but we got excited when we spotting that bad boy in the background. 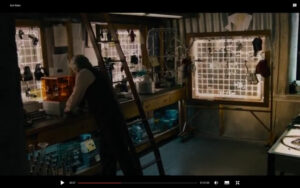 This is the second Marvel movie (that we know of) featuring a 3D printer. In the movie, there’s a scene where you can spot the Form 1+ in the background of Hank Pym’s lab. It’s quite easy to notice the iconic design of this SLA 3D printer from Formlabs with its translucent orange casing.

Did Dr. Hank Pym use it to 3D print Ant-Man’s helmet? Probably not. 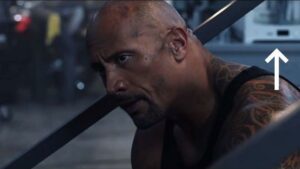 3D printers in movies – Fate of the Furious

Vin Diesel (Dom) and Dwayne The Rock Johnson (Hobbs) might be wreaking havoc all over the world in The Fast and the Furious franchise, however, they occasionally 3D print too.

In their latest movie “The Fate of the Furious”, Ultimaker made a brief cameo with the Ultimaker 3. Did Hobbs use it to print an International MXT truck?

Although these appearances don’t quite fit into the main category, we decided to include them as special mentions from 3D printer-related movies and TV shows. 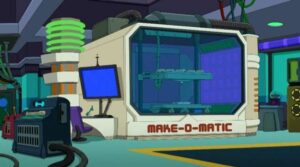 The Make-O-Matic is a large, professional 3D printer using extrusion technology and was seen in episode 4 of the tenth season of Futurama. In this episode, Bender uses the 3D printer located at Dr. Ben Beeler’s technology lab to replicate the guitar of a folk-singing hero of his.

Come with me if you want to live!

In this iconic scene from James Cameron’s masterpiece, Terminator 2, the T-1000 is able to rebuild itself and shift shapes in a way that strongly reminds us of the CLIP, a revolutionary printing process patented by Carbon3D.

Although the T-1000 is not an actual 3D printer, we couldn’t help making the connection.

Inner Ghosts is an upcoming Portuguese horror movie coming in late 2017. The plot suggests that a woman receives a device as a gift from the afterlife that can do many things– but at a price (scary!). Also, in the trivia section of iMDB it states that the 3D printers used in the film were provided by a Portuguese manufacturer, so we’re pretty sure the gift is a 3D printer.

Finally, Print the Legend is a 2014 Netflix documentary that follows various 3D printing pioneers. This documentary shows the “Macintosh Moment” of the 3D printing revolution and what it takes to live the American Dream.

Print the Legend is a must-see for all 3D printing enthusiasts.