Have you ever wondered how far a drone can fly and whether or not they can actually be used more like helicopters for inspecting hard-to-reach areas?

Nowadays, we can talk about drones that can fly many kilometers away, even though you might not have the budget for all of them. I have arranged some of my favorite quadcopters of all time in a list and ordered them by their maximum distance traveled in my top long range drones list.

You, personally, probably won’t use the drones in inspecting industrial facilities or do precise terrain mapping, but drones do have these more sophisticated options along with more daily uses.

Here are the 5 ways drones help ease our lives in different areas:

Scouting missions for rescuing people in danger has always been very hard to do with ground personnel. Seeing everything from the air can greatly benefit search and rescue operations, especially in harder to reach areas.

Even more so, with the updated technology camera drones are equipped with, they can detect humans under snow or trees with thermal imaging cameras.

Zoom lenses allow for another level of scouting for people in dangerous situations, as you don’t even have to get that close. But considering even $1,000 drones like the DJI Mavic Zoom offer both a range of 8km and a zoom lens, we could say drone technology has gotten affordable enough to be equipped by most search and rescue forces out there.

If you’re the owner of a larger terrain that makes you money though agriculture and requires occasional verification, you can save a lot of time by simply sending your drone to check the state of your field and even get closer to the crops themselves to analyze.

Again, a drone with a zoom feature might be handy. There are plenty of quadcopters under $500 that not only fly quite far away, but also come with really capable cameras, a great example with a zoom camera is the Parrot Anafi. 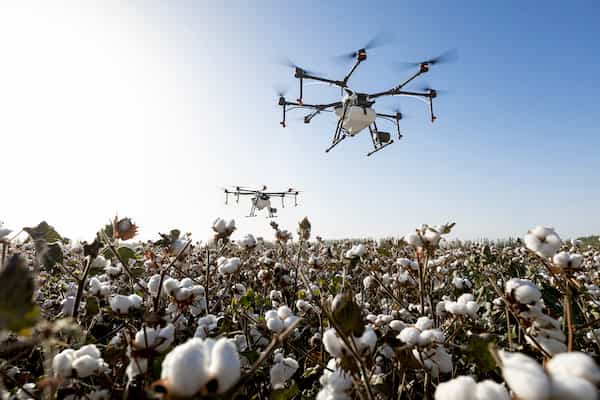 In third world countries there’s a huge need for proper medication, as unsanitary conditions might start the emergence of certain diseases.

Because time is of the essence in situations like these, main towns could send medication to neighboring villages in case of need, so they have the primary help they need, like vaccines, antibiotics and so on, even before a professional can get there.

The main use of drones that will save a lot of people from doing some risky jobs is inspecting hard-to-reach places, especially at higher altitude, where human lives could be put in danger.

Inspecting communication antennas, wind turbines and bridges will be much easier by the use of drones, especially considering this is a much cheaper process than paying someone to risk their life.

Here’s a video showing how the process of inspecting wind turbines above water would go and what type of drone is usually used in such situations:

The process of mapping requires nothing more than a capable camera drone, some time to understand the process, and a program like DroneDeploy or something else that can stitch together all the images (like photogrammetry).

The process starts with having the drone take photos by a certain flight pattern and from different angles so that the program can create a 3D image with the info of the drone waypoints and the photos themselves.

If you’re an amateur when it comes to drone use, no worries. Having a capable drone with a good range has never been cheaper or easier to pilot.

You can simply have fun by exploring your childhood places from angles that you haven’t thought possible before, or even find new areas that nobody has explored before.

I have seen cases where people inspect their own roofs, search for lost farm animals, or even use the drone as a fun scarecrow for their fields.

As a conclusion, make sure you get a drone that fits your needs. The future has a lot of room for quadcopters in many industries, but until then, make sure to make the most out of this emerging technology yourself.

Paul is the man behind Dronesgator.com, a website dedicated to everything drones-related. He also shoots review videos on YouTube.