Disclaimer: the comments and opinions expressed in this hands-on review are the results of our own (limited!) experience with the product. As always, we try to provide context to give a fair overview of the product. We strive to remain impartial and unbiased, and we have not received any payment or compensation of any form for writing this article. Creaform invited us to test the MetraSCAN 750 in their offices in Tokyo.

Creaform started in 2002 as a service bureau performing 3D scanning and reverse engineering services. The company launched its first hardware product, the HandySCAN in 2005, with a software which was then called VXscan. Creaform headquarters are based near Québec City, Canada.

Creaform’s mission is to develop, manufacture and market cutting edge portable 3D measurement and analysis technologies that increase productivity. Through its expertise, Creaform helps companies from the manufacturing industry to create, simulate, verify, and collaborate in 3D. In 2013, Creaform had annual sales of approximately $52 million.

Creaform lineup of portable industrial 3D scanners include 4 different products. The HandySCAN, the HandyPROBE, the MetraSCAN and the MaxSHOT.

The Creaform quality control solutions for every part size.

Mapping of the Creaform quality control solutions with their respective operating ranges.

Creaform also offers a more affordable range of portable 3D scanners: the Go!SCAN 50 and the Go!Scan 20.

Today, we are doing an hands-on review of the most powerful and flexible portable 3D scanning solution by Creaform, the MetraSCAN 750. The MetraSCAN 750 is an Optical CMM (Coordinate Measuring Machine) and is part of a full system, complete with the C-Track sensor.

We have been invited by the Creaform team in Tokyo to visit their offices and perform a hands-on review of three of their portable 3D scanners, the MetraSCAN 750, the HandySCAN 700 and the Go!SCAN 50. This review focuses on the MetraSCAN 750. 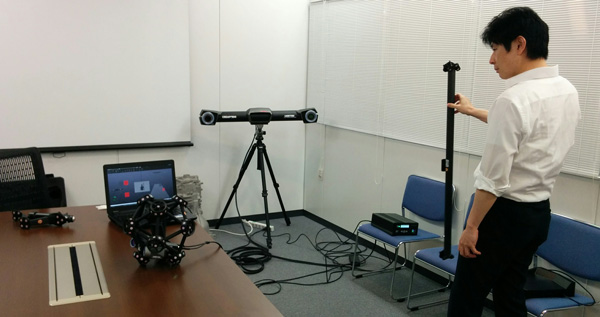 The full setup of the Creaform MetraSCAN 750 solution.

The Creaform MetraSCAN 750 is a complete solution for accurate 3D scanning. The minimal configuration includes the C-Track (the big sensor in the corner of the room), the C-Track Controller (The black box with a screen on last chair) and the MetraSCAN 750 itself, the portable sensor on the table. This system can be upgraded with the addition of the HandyPROBE (visible on the table). The bar held by the operator is used to perform the calibration of the C-Track. 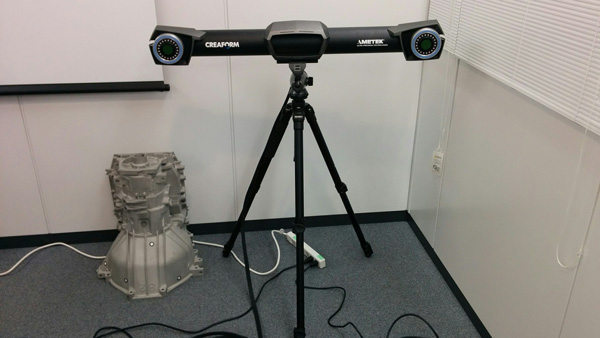 The C-Track sensor is used by the system to acquire the position of the MetraSCAN or the HandyPROBE. It is also capable of tracking the part itself in 3D space, when the part is equipped with markers (the recommended use case). 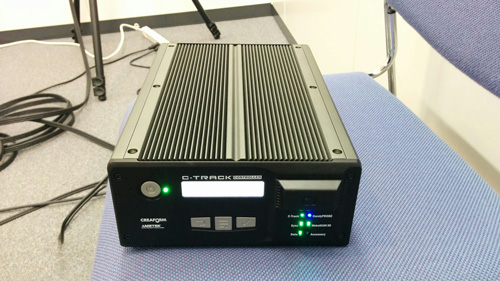 This device is the C-Track Controller. It is an industrial-grade computer that coordinates all devices involved in a HandyPROBE or MetraSCAN 3D system. It is quite big and heavy but very quiet. 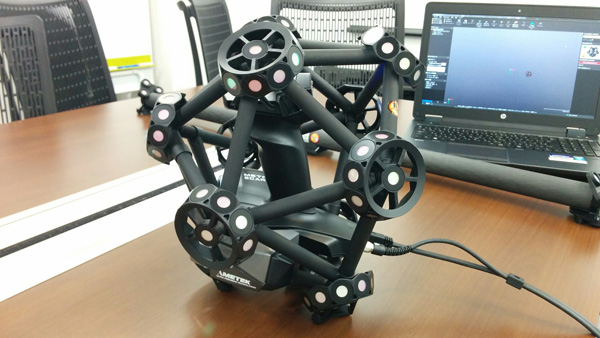 The MetraSCAN 750 itself is the optical sensor at the heart of the measurement system. At the center of it stands the handle, surrounded by reflectors used by the C-Track to precisely locate the position of the device in space. The MetraSCAN itself casts lasers to 3D scan the parts (laser triangulation 3D scanning technology). It is equipped with multi-function buttons to achieve a number of functions:

1/ Launching the Smart Control (an interface containing all the major controls of the 3D scanning system) and activating software commands.

2/ Controlling the 3D display of the software, using the device as a 3D mouse (a function called 3D Display Control). In this mode, the MetraSCAN can be used to interact with the 3D model like you would do with a Nintendo Wiimote. This may sounds like a gadget feature but in fact it is a huge asset for a great user experience. This very interesting function allows to rotate, pan and zoom the 3D scan while holding and moving the 3D scanner.

The main evolutions of the Creaform MetraSCAN 750 compared to the previous version are: 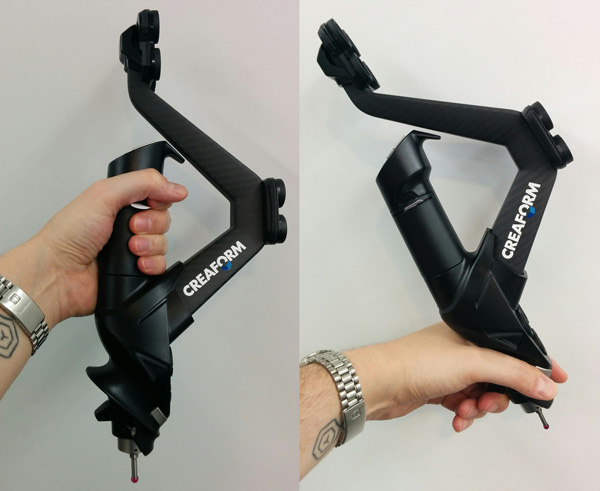 Close up of the HandyPROBE. It can be comfortably held two different ways.

The HandyPROBE is dedicated for precision measurement. The sensor only weights 0.5 kg and can be held in two different ways (cf. above pictures). Both the MetraSCAN and the HandyPROBE received a Red Dot Design award in 2016 for the quality of their design.

Getting started with the Creaform MetraSCAN 750

The Creaform MetraSCAN and the C-Track are packaged in protective hard cases, build with very strong plastic and fitted with thick protective foam. 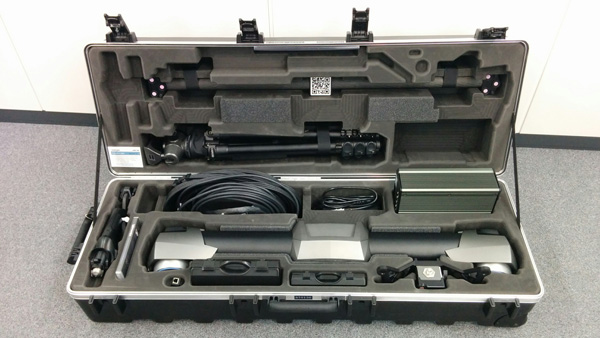 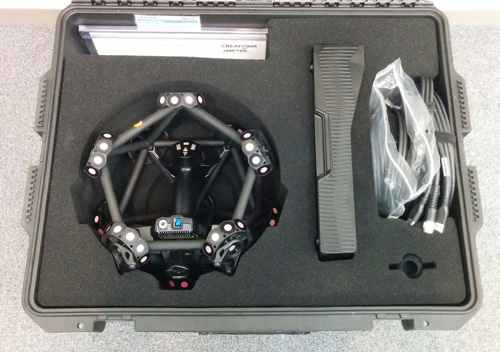 These industrial equipments require a specific calibration process. This is quite long, but not more time consuming than what you would experience with structured light desktop 3D scanners.

First the C-Track must be calibrated, a process achieved with the long vertical bar held by the operator. 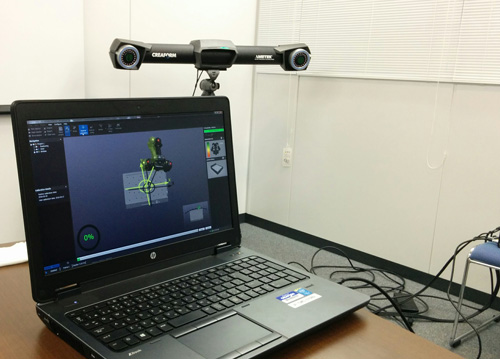 On a second step, the C-Track must be calibrated with the MetraSCAN 750 itself. The interactions is a bit like playing a video game in 3D, where you must position the MetraSCAN in specific locations in the room. 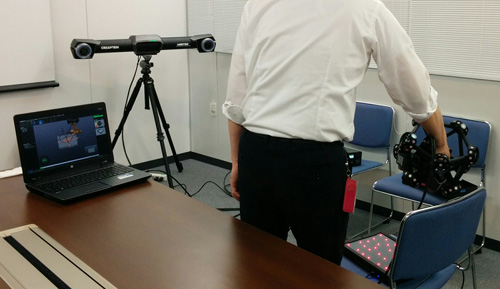 The MetraSCAN 750 itself must been calibrated, with a custom made IR plate. Each calibration process takes around 5 minutes. 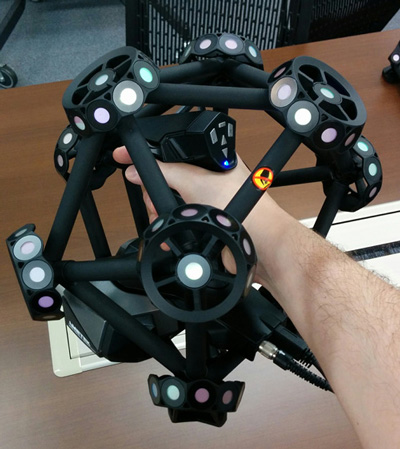 The MetraSCAN 750 is a sturdy product with a very nice finish. For an industrial-grade scanner, it looks really good and its ergonomics have been optimized. With a weight of 1.38 kg, it is not to heavy and can be comfortably held with one hand. The handle is quite big so it is easier to hold if you have big hands. The multi-functions button interface is positioned right above the handle, but manipulating them requires to hold the MetraSCAN from below with your over hand.

The cage-like structure that surrounds the handle must not be tampered with because it holds the optical reflectors used by the C-Track to locate the MetraSCAN.

For our first test, we had prepared a big sample part already equipped with markers. The MetraSCAN can work without these markers but the performance is simply better with them, and this also allows to move the part while scanning, as it is continuously tracked by the C-Track.

The part is a big metal clutch and transmission housing from Ford. We were able to perform the 3D scan in a measurement use case, where the production part dimensions are compared to the original CAD file. 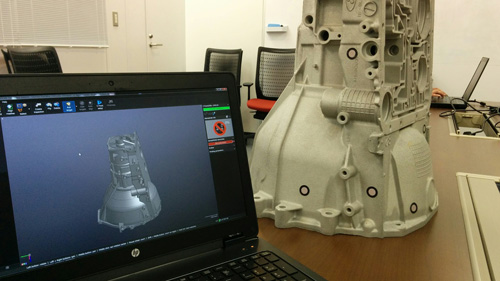 Clutch and transmission housing side by side with the CAD model.

After performing the full 3D scan of the part, the software can display the displacement values between the original CAD model and the generated 3D mesh from the scan. The MetraSCAN software (VXElements) is capable of producing a mesh in real time (real time fusion). The 3D scans are automatically stitched and fused together to create a unique 3D file. Even when you stop and resume 3D scanning of the same part, the software can realign automatically the newly generated data, and add details to an already existing geometry. All of these operations are fast and done automatically without any required action from the operator. 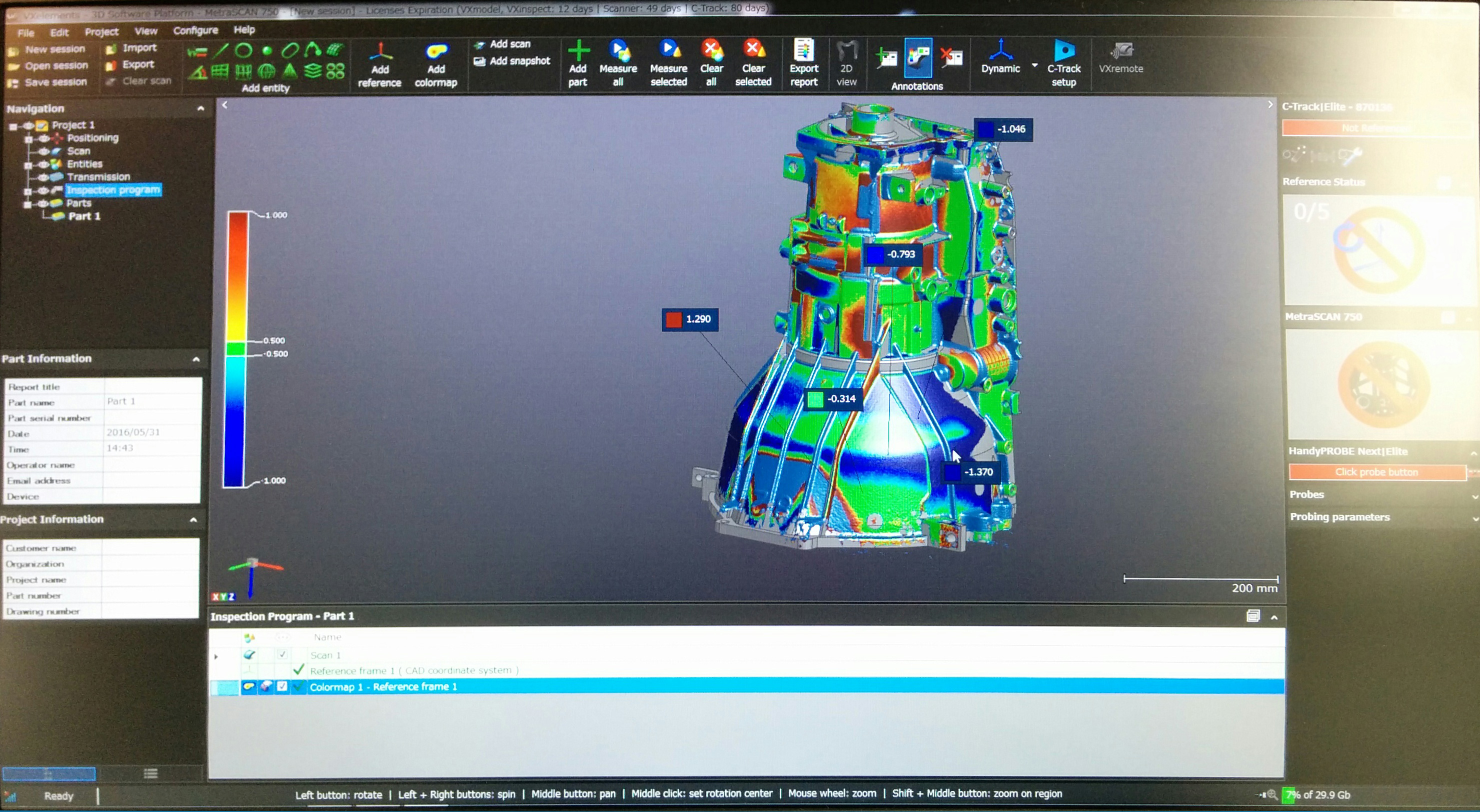 Measuring the offset between the CAD model and the real part inside VXElements software.

The MetraSCAN can work in two different modes, the “cross grid” and “single beam” modes. The beams are in fact a single laser point moved very fast. The MetraSCAN can cast simultaneously 7 crosses, while the MetraSCAN 350 is capable of only 3. 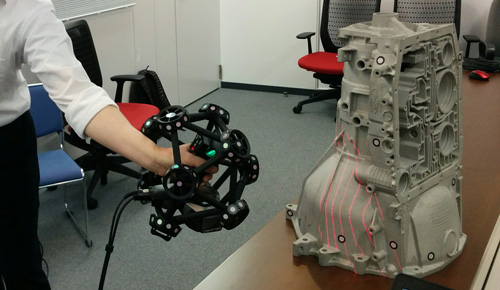 The MetraSCAN 750 in use, with the 7 laser crosses mode.

The MetraSCAN itself is connected to a computer via a USB 3 port. The laptop used in this demonstration is the recommended computer provided by Creaform. This is a powerful HP laptop with a Windows 7 OS 64 bits, 32 Gb of RAM and a Nvidia Quadro K1100M GPU. Windows 10 is not officially supported but some Creaform clients use it successfully. 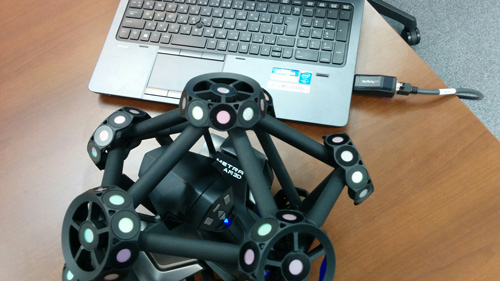 The specific Ethernet to USB 3 adapter.

After the reverse engineering use case we were allowed to test and to be demoed two very specific uses cases, chosen because they are extremely difficult to perform.

The first one was done with this chair, with an aluminium structure. Using the seven crosses 3D scan mode, the MetraSCAN was capable of producing a 3D mesh successfully. Anyone using a 3D scanner knows how difficult it is to achieve such a performance! 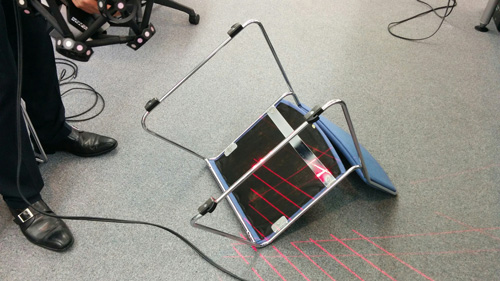 3D scanning thin and reflective material with the MetraSCAN 750.

We were then able to test another difficult use case. We scanned two objects made of different materials and textures. The white mouse is shiny with no asperities, the black box has a plastic grain and is matte. 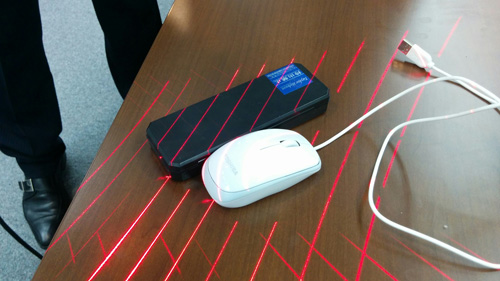 The results are once again amazing. Without any preparation, the generated mesh is dense and detailed, for both objects. This was made possible using what is called the HDR mode. In the VXElements software, a “lighting” parameter can be modified to optimize simultaneously the capture or dark and white objects.

The MetraSCAN 750 is a complete 3D scanning solution designed for industrial uses cases. This is the first time we had the opportunity to experience such a high-end 3D scanner. The user experience of the MetraSCAN is excellent, with fast and efficient software, and an ergonomic sensor. We particularly like the multifunction button interface, specifically the interaction modes where the MetraSCAN 750 can be used as a 3D mouse to manipulate the 3D files. The calibration of the whole system takes time but conducted step by step it is not a complicated process, and once done in a specific environment to does not need to be performed again.

Regarding the 3D scanning performance, the MetraSCAN 750 is simply the best performing 3D scanner we ever had the opportunity to test (it’s also among the most expensive!). It is fast and works on any parts and object.

We carry out tests of 3D printers, 3D scanners and 3D filaments in our lab in Tokyo. Get in touch if you’d like us to review your products! 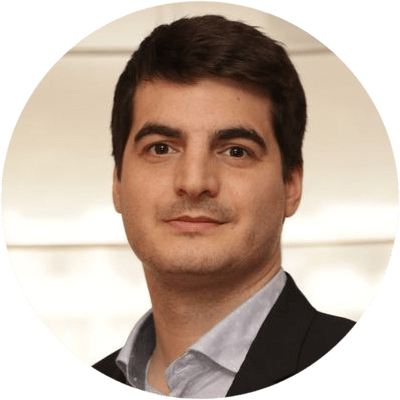