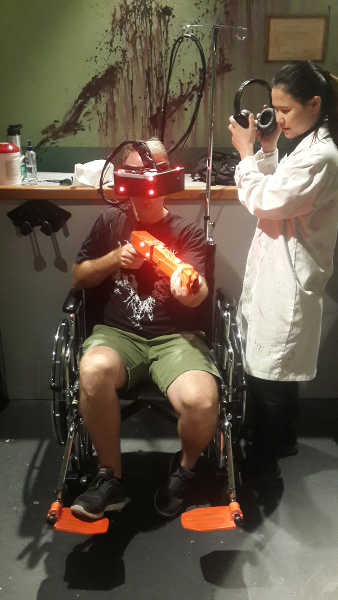 As we were pushed for time visiting the VR Park, we opted for The Walking Dead Outbreak game. Ideally, my brother and I were looking for a cooperative game we could play together, it sadly wasn’t an option in this VR experience.

The entrance and staff are dressed up for the Walking Dead world, with blood splattered hallways and uniforms. We were lead to a room which looks like a medical lab and seated in a wheelchair. Then we were handed our Star VR headsets and the pump action style gun. They manage to get around issues of the tethered headset and any possibilities of a customer damaging equipment, or themselves, by having your character partially immobile in the game, hence the actual wheelchair.

The game itself is as expected, a little scary, and full of zombie killing. There isn’t much interaction in altering the story but you are rather forced along the linear storyline. It’s pretty immersive though and the need to reload the gun is pretty cool, adding to the immersion, while the VR headset is a little heavy it offers a fantastic FoV. The VR experience suffers from some sound issues and a flat story but it’s good fun and lasts about 10-12 minutes.

Starbreeze has developed the experiences for the Acer backed StarVR headset, primarily used for location-based installations like the IMAX VR arcades and the arcade style VR found at Dubai VR Park. This virtual reality gear is developed for enterprise and professional entertainment use. The headset boasts a 210 degree field of view and a 5K resolution as well as a scalable tracking system to suit various needs. 8 experiences at VR Park Dubai use this VR headset.

The Raft is a four multiplayer game and uses the HTC Vive VR headset. Potential tethering issues have been addressed by packing a powerful micro PC into a backpack which the users strap on, to not restrict their movement.

The Samsung Gear VR is used on the Geminose VR experience. This rotating carousel has soft cushions on the floor, with the game aimed at children under staff supervision. Obviously, it is at the parents discretion as some VR manufacturers suggest a minimum age limit for their headsets. 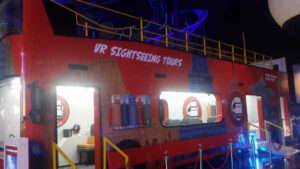 I like the concept of a VR Park, although it was pretty quiet on my visit you can see the potential of the site and how location-based VR can garner more mass appeal for virtual reality and act as a great gateway for users to experience VR for the first time.

Although VR Park Dubai aims to suit the whole family, the Walking Dead game, for example, wouldn’t be child-friendly. Other VR experiences also have some height, health, size and age restrictions. It is recommended to leave about 3 hours to try all the experiences at the VR Park. There is also a food and beverage outlet inside the Park called PVRK Café.

Some users complained of feeling nauseous after trying some of the games, so if you are new to VR, take it slowly and see how you adjust to the immersive VR experiences.

Don’t forget to check out our VR and AR headset comparison engine. 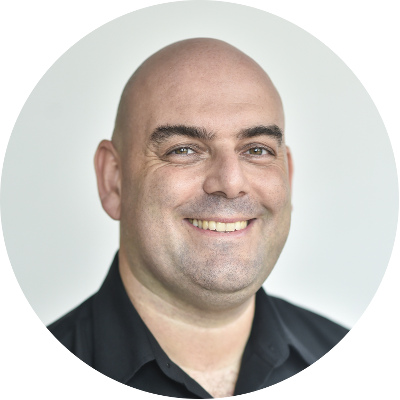