What is terrestrial laser scanning?

Terrestrial laser scanning (TLS) is a form of 3D scanning in which tripod-mounted laser scanners are used to capture large objects and environments. The technique is widely used in construction, surveying, forestry, and other disciplines.

Also known as long-range laser scanning, TLS involves deploying a scanner in a static location, whereas other laser scanners may be handheld or mounted to vehicles to capture data from a greater number of vantage points. TLS produces more accurate scans than mobile scanning — at the expense of speed and simplicity.

These 3D scanners are often generically called LiDAR scanners, though terrestrial scanners aren’t the only type of scanner to use the technology.

Depending on their range, speed, and features, terrestrial laser scanners generally cost between $20,000 and $100,000. Most are bundled with dedicated software packages that allow the user to process the scanned data for specific use cases.

This guide compares some of the leading models of terrestrial laser scanners from brands like Leica Geosystems and FARO, in addition to explaining how the scanning technology works and who uses it.

The above table represents our selection of some of the best terrestrial 3D scanners and long-range scanning solutions available this year. They are ranked by price, from lowest to highest.

*Price: These ballpark prices are indicative, and may vary over time and/or from one country to another (taxes, shipping, …). Contact us for more information.

Here we provide a deeper look into each terrestrial 3D scanner from our list.

Quote
Described by Leica Geosystems as the smallest and lightest laser scanner in the world, the BLK360 weighs just 1 kg and is only 165 mm tall.

The low price point of the BLK360 is reflected in its slower scanning speed compared to the RTC360, but unique benefits include push-button functionality and thermal imaging capabilities.

Quote
Florida-headquartered Faro, a specialist in 3D capture, designed its FOCUS S series for the fast and straightforward scanning of complex objects.

The FOCUS S 70 is the company’s best-selling model, and includes a touch-screen interface, 8-megapixel camera, and a sealed design to guard against high temperatures and challenging outdoor environments.

With a range of 70 meters, the S 70 is the most affordable scanner in the FOCUS S series, and suitable scanning objects include architectural facades, production facilities and accident sites.

Quote
The Trimble X7 is a high-speed laser scanner offering automatic calibration, self-leveling, and automatic registration Californian company Trimble provides a two-year warranty for the X7, which is greater than the industry standard.

This laser scanner is one of the easiest to use, and doesn’t require in-depth skills or knowledge of 3Dscanning. Point clouds are automatically exported in common file formats (e.g. RCP for Autodesk), eliminating the need to convert the data via intermediary software.

Quote
The Maptek SR3 is a terrestrial laser scanner designed for underground surveying and mapping. Its 600-meter range is long by most standards, but still makes it the shortest-range scanner in the Maptek R3 series.

Maptek, headquartered in Colorado, designed the SR3 to be smaller, lighter, and faster than previous models. The scanner also offers IP65 protection, keeping out dust and debris when scanning voids, drives, and tunnels underground.

The GLS 2000S is a compact and lightweight system that captures a full 360° scan in under three minutes. It offers selectable laser modes (Class 3R to Class 1M), a multiple lens array system, and automatic temperature adjustment.

All scanners in the GLS 2000 series come with MAGNET Collage software.

Artec, based in Luxembourg and well-known for producing some of the best handheld 3D scanners, recommends the Ray 3D laser scanner for applications like reverse engineering, inspection, and construction, on objects like buildings, propellers, vehicles, and turbines.

The high-accuracy scanner is lightweight, compact, and portable, and works in conjunction with the popular Artec Studio software suite. Computer-free scanning is made possible using the Artec Remote app.

Quote
The IMAGER 5016 is a compact and lightweight 3D laser scanner from German company Zoller + Fröhlich.

Equipped with an integrated HDR camera, internal lighting, and a dedicated positioning system, the IP54-rated scanner has a maximum range of 360 meters and returns accurate results even at long distances.

The IMAGER 5016 also offers scanning speeds of up to a million points per second.

The terrestrial laser scanner boasts features like an integrated high-resolution camera, inclinometers, a compass, a GPS receiver, and weather-proof housing. The Polaris HD model offers the highest scanning speeds in the Polaris series.

Quote
The 100HSX from Washington’s Surphaser is a portable, low-noise laser scanner offering sub-millimeter accuracy and a range of up to 50 meters. One version of the scanner can be configured to prioritize either range or noise reduction depending on the application.

Features include a robust construction, an optional camera system with 60-megapixel-equivalent color images, and an optional PC controller.

Quote
The Riegl VZ-400i justifies its high price point with its innovative processing architecture and, to a lesser extent, its unusually long range.

How does long-range laser scanning work?

Many terrestrial laser scanners use a technology known as LiDAR (Light Detection and Ranging), which consists in shining lasers at an object and measuring the reflections with a sensor.

This technology analyzes laser return times and wavelengths to determine the position and dimensions of the object or environment.

The practice of terrestrial laser scanning involves setting up one of these LiDAR-based scanners, usually on a tripod, in or near the scanned object or environment. Then, the scanner captures the data in the form of a point cloud — a set of spatial, 3D data points.

The scanner must be moved and set up at different static locations in order to collect scan data from multiple angles. To obtain an accurate 3D scan of a building, for example, you need to scan it from more than one side.

If multiple large areas are being scanned, software is used to perform point cloud registration, which combines the separate data sets (point clouds of four different facades of a building, for example) into one complete set.

Although “long-range laser scanning” is often used synonymously with TLS, some terrestrial laser scanners are defined as “short range” or “mid range” in relation to other models of a brand’s product line.

In practice, these distinctions may not be critical, since most applications do not make use of the hardware’s full scanning range.

Short-range terrestrial laser scanners may be used to capture targets like building facades, crash sites, crime scenes and minor construction sites. They should not necessarily be considered entry-level scanners, since their accuracy and speed may be greater than long-range models.

Mid-range terrestrial laser scanners may be used to capture targets like larger building facades, larger construction sites and vehicles such as aircraft.

Long-range terrestrial laser scanners may be used to capture expansive outdoor environments like forests and urban areas, especially if there are obstacles that prevent operators from setting up near the scanned object.

Software plays an important role in the terrestrial laser scanning workflow, both in the field and in the office.

When we talk about laser scanning software, we often mean the computer software that stitches together multiple point clouds in a process known as point cloud registration.

But software may also include 3D modeling and visualization tools, and even programs within the scanning hardware itself — for real-time feedback on a built-in interface, for example.

Comprehensive software suites may include individual applications for all of the above. Leica Cyclone, for example, comprises 10 separate modules for different tasks and applications.

Functions of TLS software may include:

Some field software packages created for use on mobile devices can provide real-time scan data feedback, which is useful for on-site inspection and quality control tasks that must be completed within a set time period.

Most long-range scanners come with a dedicated software package, but there are also suites that are not hardware-specific, such as Autodesk’s ReCap Pro.

An alternative to terrestrial laser scanning is mobile laser scanning, in which the 3D scanner is carried around by an operative or mounted to a vehicle like a car or drone.

There are advantages to both mobile and terrestrial laser scanning, and it is even possible to combine the two.

Mobile mapping systems (MMS), which combine laser scanning with positioning technology like GPS, GNSS, or SLAM (simultaneous localization and mapping), are a faster means of acquiring data than TLS, since operatives simply need to move the scanner around the surveyed area in order to gather data. There is no need for multiple tripod setups.

Additionally, a lower level of skill is required to use a handheld or backpack-mounted scanner. Most devices just need to be powered up and moved around.

Furthermore, many mobile laser scanners — mostly iMMS (indoor mobile mapping systems) — use SLAM algorithms. This enables them to be used in indoor and covered spaces, since they determine their own location based on their surroundings rather than relying on a GPS or GNSS signal. 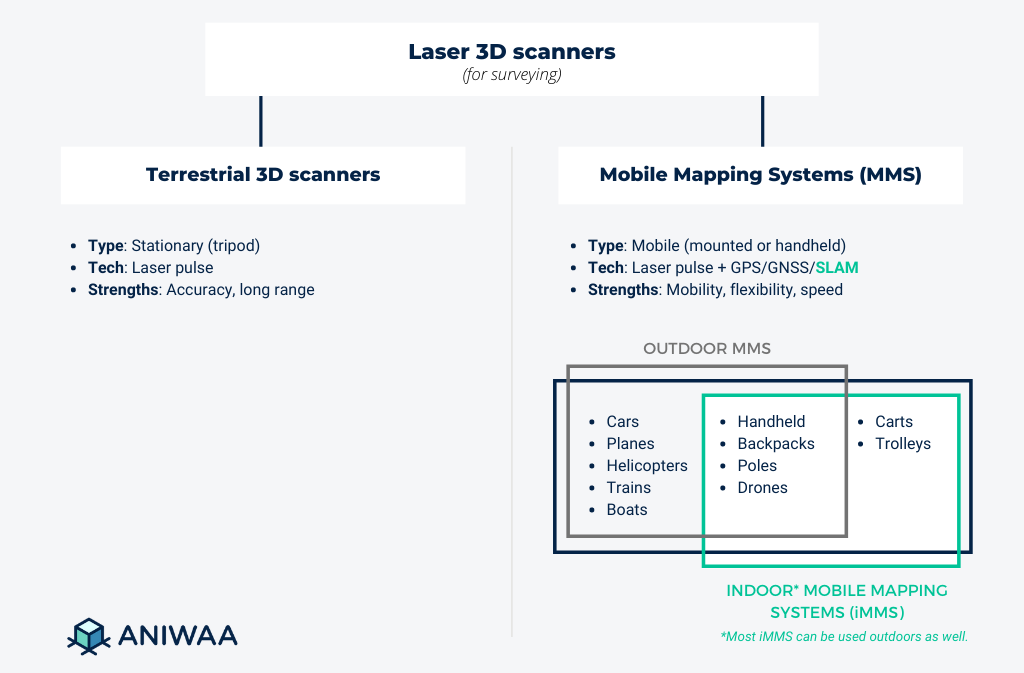 Usually, and as long as setup and registration are performed correctly, TLS produces much more accurate scans with more dense and complete point clouds than those created by MLS. Furthermore, TLS devices tend to offer HDR imagery, while many MMS devices do not (yet).

TLS may also be favored for economic reasons, since little additional equipment is required, whereas mobile mapping systems may require the purchase of a drone or the use of extra operatives to drive or pilot a vehicle.

If a company has sufficient resources, it may benefit from the use of both terrestrial and mobile laser scanners for the same project.

For example, a terrestrial laser scanner can be used to capture high-quality point clouds from the ground level, while a drone-mounted mobile laser scanner surveys the upper regions of a site from the sky.

The drone-captured data will be less accurate, but registering the two data sets will provide a more complete picture of the site than what would be possible with either scanning technique on its own.

Terrestrial laser scanners are used to capture visual data in many industries, where sub-centimeter accuracy is required. Applications and industries include:

The cost of a terrestrial laser scanner can range from under $20,000 for starter models to over $100,000 for the most high-end systems.

Models at the lower end of the spectrum are still suitable for many professional applications.

Terrestrial laser scanner prices may depend on technical factors like range and accuracy, as well as features like integrated GPS receivers, HDR imaging, on-site registration and compensation, software packages, and any included accessories.

What is the best 3D laser scanner?

Different 3D laser scanners are suited to different applications. For example, the Leica RTC360 excels in scan speed, while the Riegl VZ-400i has exceptional range. Meanwhile, the Maptek SR3 is designed specifically for underground applications.

What is 3D laser scanning in construction?

Construction professionals often use 3D laser scanners to better understand the layout and features of a construction site. Scanners can be used for monitoring land deformation, surveying buildings, measuring elevation, and much more.

What does “terrestrial” mean?

In the 3D scanning and mapping industry, the term “terrestrial” mainly refers to long-range laser 3D scanners that are mounted on tripods.

Benedict O'Neill has been in the additive manufacturing industry since 2015, working for manufacturers and media outlets (3Ders, 3D Printing Media Network). He received his BA from King’s College London in 2013 and his MA from the University of Amsterdam in 2015. Benedict lives in Canada and has been a contributing editor at Aniwaa since early 2020 while working on a freelance basis for 3DPMN.