The Afinia ES360 uses a structured white light technology. A white light is casted by a projector on the object at the center of the rotating plate. Degree after degree the plate turns so the object can be 3D scanned from all sides. The process takes around 5 minutes and also captures the textures (colors) of objects.

The Afinia ES360 has a free scan mode where the user holds himself the sensor and moves it around the object. 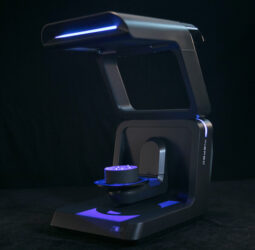