Revopoint has been launching scanner after scanner, with the original POP in mid-2021, the POP 2 in late 2021, and now the MINI– available now on Kickstarter. Keep reading to find out more about this new affordable 3D scanner, how it works, and its main applications.

MINI
A quick look at the MINI’s main specs
What can you do with the MINI?
Revopoint POP 2 vs MINI
Updated software: Revo Scan
How to get the new Revopoint MINI

Last year, Revopoint became the most funded 3D scanner manufacturer in Kickstarter history, raising over $5 million USD to launch the POP. The POP series uses infrared light and RGB cameras to capture objects in 3D and in full color. Several months later, they launched the POP 2 at a retail price of around $769. It’s one of the most affordable 3D scanning solutions available for makers and consumers. 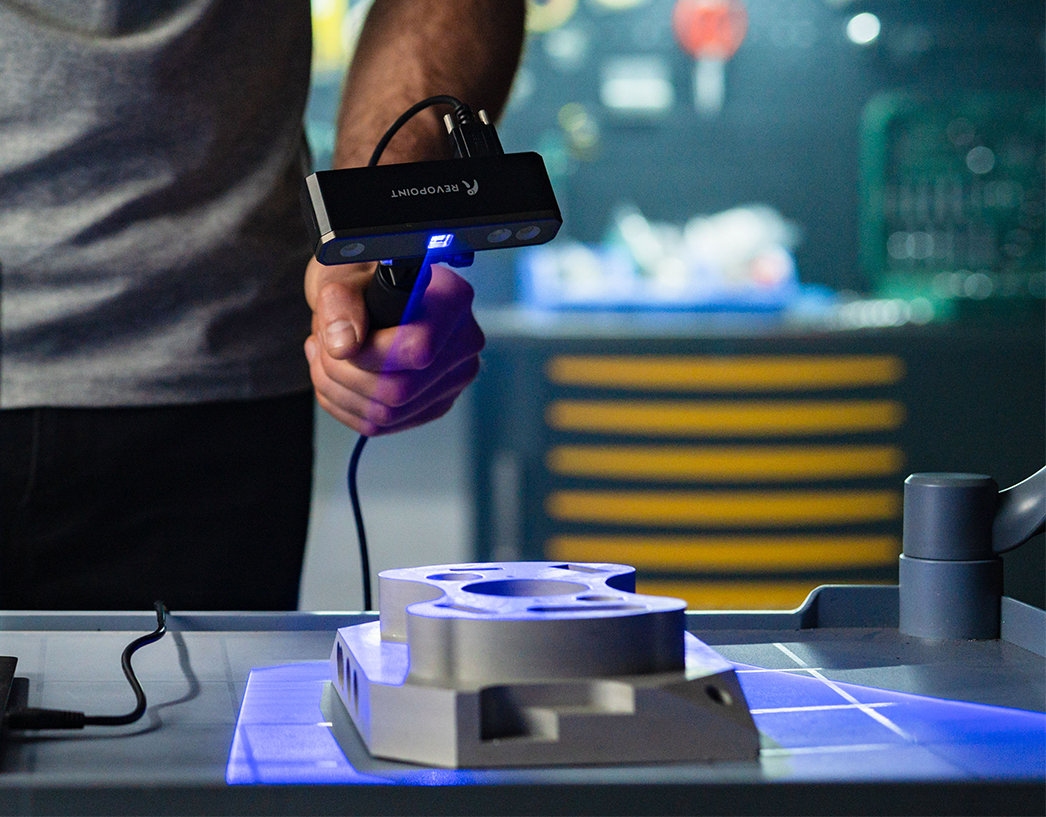 The Revopoint MINI is an affordable blue light 3D scanner by Revopoint, a manufacturer based in China. This low-cost 3D scanner can be used as a desktop 3D scanner with a tripod and turntable, or as a handheld 3D scanner by folding the tripod.

Buy on Revopoint Add to comparison

A quick look at the MINI’s main specs

The MINI casts blue light patterns onto an object’s surface in order to gather 3D data points of the object’s shape. Its software can do this by measuring exactly how much the patterns were deformed when they hit a specific area.

With this technology, the MINI is able to scan at a speed of up to 10 FPS within a capture range of 64 x 118 mm. Revopoint has announced an impressive precision of up to 0.02 mm, and a mesh resolution of up to 0.02 mm (which basically corresponds to the distance between each point in the final mesh).

What can you do with the MINI?

Revopoint is marketing the MINI for a variety of use cases, including applications like reverse engineering, dental modeling, jewelry design, part inspection, and 3D printing.

The level of detail they show via results from a beta tester on their forum is indeed impressive for a scanner in this price range:

The user also demonstrated a reverse engineering and 3D printing combo with a piece of jewelry:

Reverse engineering for 3D printing is a widespread use of 3D scanning for makers and professionals alike.

And, just like the POP 2, the MINI can be used both in handheld mode and tripod mode with a turntable, depending on the given use case. The resulting 3D models can also still be exported to all major engineering and design software for a convenient cross-platform workflow.

The POP 2 and the MINI are both affordable structured light 3D scanners, but the POP uses invisible infrared rays while the MINI uses blue light. In a nutshell, infrared light is better for face 3D scanning cases since it doesn’t blind users, while blue light can be more suitable for capturing objects with higher accuracy. Furthermore, blue light is best used indoors whereas infrared light can provide good results both indoors and outdoors.

The MINI also offers a smaller scanning area and reduced working distance, as it is designed for more professional applications where higher accuracy and resolution are required. As such, it offers a single-frame accuracy (lab-measured) of up to 0.05 mm, whereas the POP offers one of 0.1 mm.

Here is a recap of each scanner’s specifications:

Revopoint is also releasing a beta update of its Revo Scan software (ex HandyScan software) for both Windows and Mac users. The main novelty of this version is the possibility for users to set the minimum point distance to 0.02mm for a higher level of detail on the resulting mesh.

Users can also download (free) Revo Studio for easy model editing, and Revo Calibration to re-calibrate their hardware once in a while and ensure better accuracy over time.

How to get the new Revopoint MINI