The 3D Systems ProJet 460Plus is a professional 3D printer made by 3D Systems, a manufacturer based in the USA.

The 3D Systems ProJet CJP 460Plus and the professional 3D printers of the ProJet X60 line use a ColorJet Printing (CJP) 3D printing technology. ColorJet Printing (CJP) involves two major components: core and binder. Core material is spread in thin layers over the build platform with a roller. After each layer of core material is spread, color binder is selectively jetted from inkjet print heads over the core layer, causing the core to solidify. The build platform lowers and the process is repeated, layer after layer. Once the 3D printing is complete, an infiltrant is used to finish the part and obtain a sandstone model. 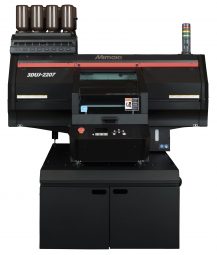