Micro 3D printers and micro AM

What is micro 3D printing?

A small number of micro-precision 3D printing technologies, such as two-photon polymerization, are also forms of nanofabrication technology since they can produce incredibly small structures with features measurable in nanometers (units one thousand times smaller than a micron).

This guide covers all the main micro 3D printing technologies and their applications, in addition to providing an overview of the market’s leading µAM systems.

At the macro level, selective laser sintering (SLS) is a form of metal additive manufacturing in which a computer-controlled laser beam sinters particles of metal powder to make a 3D shape. A moving platform allows the printer to move from one 2D layer to the next.

Some micro 3D printers use micro laser sintering, a form of high-precision metal 3D printing, to make very fine-featured metal structures. The technology is similar to SLS, but with up to three main differences: a smaller laser spot size, a platform that can move in smaller increments and therefore produce thinner layers, and powders with a small-diameter particle size.

A related technology is projection microstereolithography (PµSL), which uses UV projections instead of a laser and can cure entire 2D layers at once. In this way, PµSL resembles the macro 3D printing process of digital light processing (DLP) as much as stereolithography.

Micro SLA produces micro parts that may be used in industries such as medicine, while clear resin parts can be used in areas like microfluidics and microoptics.

The 2PP process works a bit like SLA and other photopolymerization processes, only with a much more localized area of polymerization. During the process, a photoinitiator molecule within a photoresist absorbs two photons simultaneously. This initiates polymerization around a laser beam spot, creating a single voxel. This nanofabrication process is repeated until a 3D shape is built out of multiple voxels.

Materials for two-photon polymerization include acrylic and epoxy resins, and applications include medical microdevices, microoptics, and material engineering.

Novel methods of microfabrication are constantly in development. Some less common micro-precision 3D printing technologies include:

Overview of the best micro 3D printers in 2021 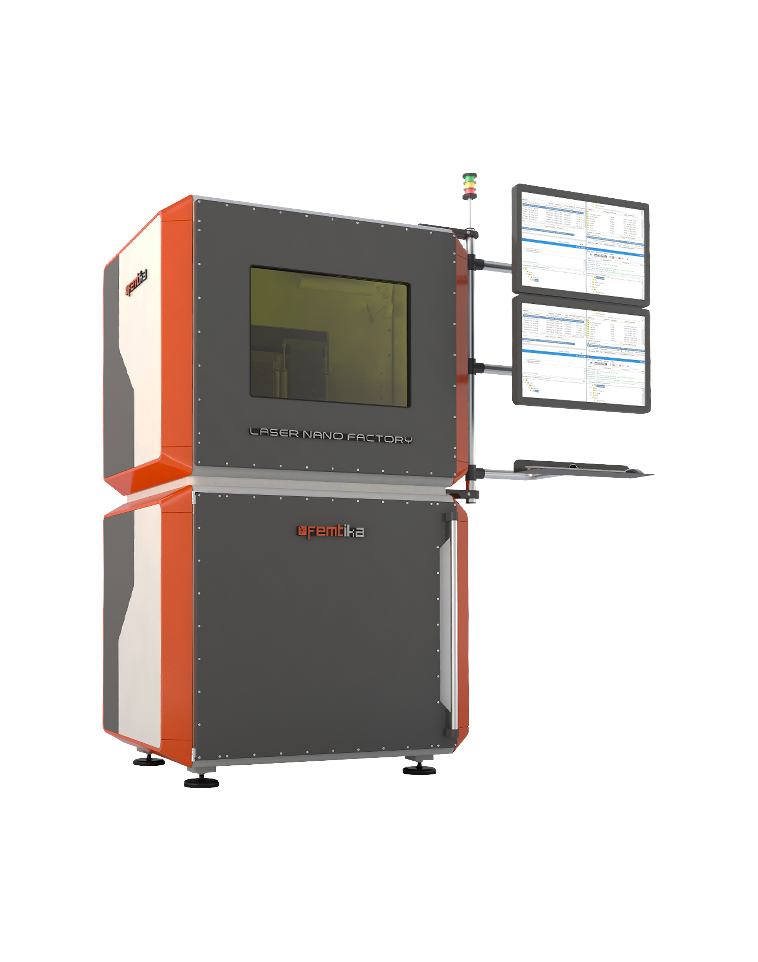 Femtika is a Lithuanian company spun off from the Vilnius University Laser Research Center that specializes in hybrid nanofabrication systems.

The Femtika Laser Nanofactory is a hybrid additive and subtractive nanofabrication machine that combines multiphoton polymerization with selective laser etching and laser ablation. Its main advantages are multimaterial fabrication — of, for example, etched glass microchannels with printed polymer nano filters — and support-free printing.

Femtika’s hybrid system is designed for industrial nanofabrication R&D in areas like biotech, medicine, microoptics, and photonics, as well as for academic research.

Multiphoton Optics, a subsidiary of Heidelberg Instruments Mikrotechnik based in Germany, is a two-photon polymerization specialist.

The company’s Multiphoton Optics LithoProf3D nanofabrication printer provides sub-micron resolution and is designed for polymer printing on substrates of various shapes and materials, including active devices like LEDs. The system is also capable of laser ablation.

Built for academic and industrial users, the LithoProf3D has applications in microoptics, photonics, micromechanics, and biomedicine.

German company Nanoscribe is a nanofabrication specialist that has developed technology based on two-photon lithography. 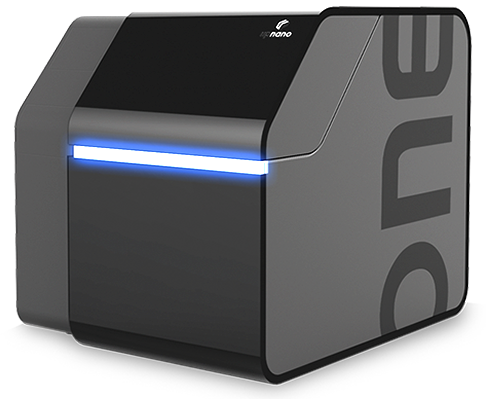 Austria’s UpNano is a two-photon polymerization company that has developed two versions of its nanofabrication micro 3D printing system.

The UpNano NanoOne is a 2PP printer with an especially high throughput of up to 200 cubic millimeters per hour and a resolution of 0.17 microns. The system is suited to tasks in microoptics, microfluidics, micromechanics, and medical engineering.

UpNano has also developed the NanoOne Bio, a micro 3D bioprinter that can print a gelatin-based hydrogel to make structures that mimic the microenvironment of cells. 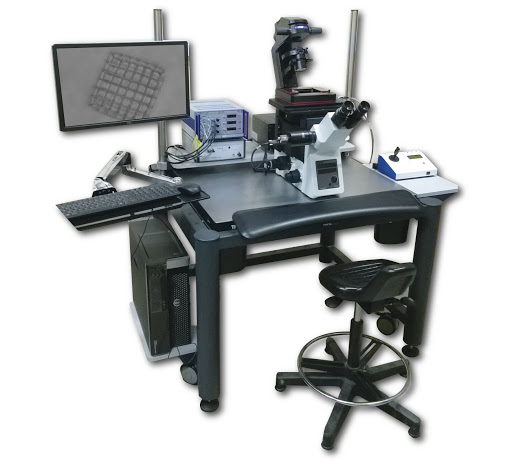 The company’s µFAB-3D is a 2PP nanofabrication system with a resolution of 0.2 microns, enabling the printing of microstructures and nanostructures with very smooth surfaces that do not require post-processing. It is available as a basic model or as a customized system with user-specific features.

The µFAB-3D can be used in areas like microoptics, microfluidics, cell biology, and metamaterials.

Canadian microfabrication specialist Nanogrande is one of a handful of companies making 3D printing technology for micro metal parts.

Compatible with several metals including titanium, platinum, and gold, the micro 3D printer is suitable for applications in watchmaking, jewelry making, electronics, and mold tooling.

Switzerland’s FEMTOprint is a company unique in its goal of creating micro 3D printers capable of fabricating glass microdevices.

The FEMTOPRINT platform uses a light source to modify the refractive index and density of the material, enabling the production of sub-micron glass structures usable in fields like microoptics, microfluidics, electronics, and micromolding.

Exaddon, based in Switzerland, is a metal micro 3D printing company spun off from biotech company Cytosurge AG.

The Exaddon CERES uses electrochemical deposition (an ion tip pushes out tiny quantities of ion ink which are transformed into solid metal by a reduction reaction) to fabricate parts at sub-micron resolution. The machine can also locate substrates with sub-micron accuracy to enable direct printing onto other micro components.

The ability of the CERES to print onto substrates is useful in brain-machine interfaces, semiconductor surface modification, and in high-frequency communications components, e.g. microneedles on a chip.

Based in Israel, micro AM company Fabrica Group (ex Nanofabrica) has developed its own Micro Adaptive Projection technology, a form of micro digital light processing (DLP).

The company’s 3D printing system, the FABRICA 2.0, moves its build plate through a vat of photosensitive resin in increments of 1 micron, while the XY accuracy of its projection system is also 1 micron. Materials include an ABS-like resin and a ceramic-filled resin.

A relatively large build volume allows for the simultaneous microfabrication of many micro parts, allowing users to use the FABRICA 2.0 for prototyping or mass production.

The company’s BMF microArch P130 uses a DLP-like technology called Projection Micro Stereolithography (PµSL) and offers an optical resolution of 2 microns. It is compatible with BMF materials — including a high-temp resin and a biocompatible resin — and third-party materials. The microArch S130 offers a larger build envelope.

Germany’s 3D MicroPrint was founded via a collaboration between EOS and 3D-Micromac and focuses on micro laser sintering for the microfabrication of metal parts.

3D MicroPrint says its systems are typically used by those in medicine, automotive, aerospace, semiconductor and MEMS production, energy and chemical, watchmaking, and jewelry making.

LMM, a photopolymerization process in which metal powder is dispersed throughout a photosensitive resin and selectively polymerized by a light source, is the foundation of the plug-and-play Incus Hammer printer. With part and material quality comparable to metal injection molding (even without post-processing), the Hammer offers wide material compatibility and industrial scalability.

Incus says its 3D printer — which can print non-flowable and non-weldable metals, including titanium and precious metals — has applications in aerospace, energy, medical, automotive, and jewelry making.

Microfabrication and nanofabrication applications span a range of industries and areas of research, from electronics to lab-on-a-chip microfluidics.

Miniaturization and lightweighting are a high priority in the electronics industry, and micro 3D printing enables the production of tiny electronics components like micro antennae, RF devices, and electrical contacts.

Some micro 3D printers can also print directly onto substrates such as LEDs and photodiodes, reducing the need for the assembly of micro components.

Micro 3D printing technology is becoming more commonplace in both the aerospace and automotive industries, where micro and nanoscale components have many uses.

One area of µAM receiving a lot of attention is the development and production of novel sensors that can detect pressure, temperature, and humidity — all of which require control and monitoring within vehicles.

The medical and healthcare sector can benefit from the use of microfabrication systems, both in clinical and research settings.

Many microoptics and microfluidics applications overlap with medicine, while microfabrication is also being used to develop micro drug delivery devices and biomedical instruments like microneedles and microporous membranes. Other medical applications include cell-sized micro-robots.

A key application for microfabrication is the development and production of meta-materials or microstructures.

3D printed metamaterials are microstructures with highly sophisticated internal patterns that affect the physical behavior — the elasticity and resistance, for example — of the structure as a whole. These patterns, which can be generated automatically using topology optimization software, often take the form of lattices.

Printed metamaterials are used in mechanical engineering, aerospace, sound insulation, and other areas.

Microfabrication technologies that produce finely detailed and smooth-surfaced polymer structures are often suitable for the production of microoptics: optical systems typically measuring between a micron and a millimeter in size.

Microfluidics is a field of science focused on the manipulation of tiny quantities of fluids, usually through precisely engineered channels. It has practical applications in areas like lab-on-a-chip technology, inkjet printing, and micro-thermal technologies.

Micro 3D printers can be used to fabricate microfluidic systems comprising extremely narrow fluid channels — which can be printed either directly or as masters (printing the would-be hollow area and molding around it) — as well as other microfluidic elements such as filters, nozzles, and capillary pumps.

Micro 3D printing may be seen as an alternative to more established microfabrication processes like CNC micromachining and micro injection molding. However, these micro-precision technologies work in different ways and have different strengths and weaknesses.

CNC machining is a manufacturing process in which a cutting tool removes material from a workpiece according to computer instructions. Most CNC machines have minimal tolerances of around 50 microns, but CNC micromachining allows for much greater precision.

Advantages of CNC micromachining include a wide range of material options, especially metals, and the ability to machine micro features on macro parts.

Like macro injection molding, the micromolding process involves forcing molten material into a metal mold (which may be produced using micro 3D printing, CNC micromachining, or another microfabrication process).

Although limited to thermoplastics, micromolding is a highly valuable process for fabricating large quantities of identical parts, with a far better production rate than micro 3D printing or CNC micromachining.

Micro injection molding can work in tandem with micro 3D printing, with the latter able to produce micro tooling. Small-batch 3D printed tooling can even be printed in non-metal materials using, for example, 2PP or micro SLA printers.

Improvements in the technology will open up new possibilities such as 3D printed micro tooling with a lifespan of 1,000+ shots, smaller components for wearable electronics, improved biomedical devices, and faster micro-scale prototyping.

Can regular 3D printers be adapted for micro 3D printing?

The minimum feature size of macro 3D printers is limited by hardware such as stepper motors (and how finely they can move a build platform or printhead) and lasers (and the size of the laser spot).

Microfabrication is a generic term for manufacturing processes (micro 3D printing, micromachining, etc.) capable of producing microscale parts, i.e. those measurable on the micron scale. Nanofabrication is another catch-all term, but for manufacturing processes that can produce nanoscale parts, i.e. those measuring well below 1 micron.

Can micro 3D printing be combined with other technologies?

Some micro 3D printers, such as the Femtika Laser Nanofactory, are hybrid systems that can perform substractive microfabrication processes like etching. Others are capable of printing directly onto substrates such as microscale parts that have been made using other manufacturing processes.

Micro 3D printing can also be used to make tiny molds or patterns for use in micro injection molding.