Low-cost 3D printer manufacturers– mostly Chinese– have been driving prices down over the past two or three years, all while putting more and more effort into quality.

We’ve gone from complex, DIY 3D printer kits that required hours or days to be assembled, to more user-friendly, pre-assembled machines that you can almost use right out of the box.

New standards have arisen, too. Features that used to be considered rare are now pretty common on the top 3D printers under $1,000: filament detection, heated beds, touchscreens, closed frames, and more.

Without further ado, let’s move on to the next section to check out which FDM 3D printers pack in the best performance for under $1K!

Overview of the best budget 3D printers under $1,000 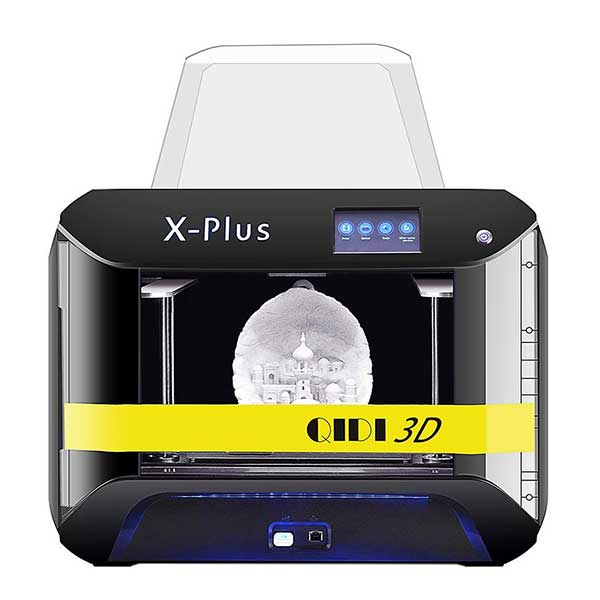 This desktop 3D printer offers a pretty good performance for the price. It has dual Z-axis rails to provide more stability and avoid wobbling issues, and it’s versatile in terms of material compatibility.

Indeed, Qidi Tech includes two interchangeable extruders with the printer. One for common types of filament such as PLA or ABS, and one that’s tougher and can reach higher temperatures for Nylon, Carbon-fiber filled, and even Polycarbonate.

The printer’s flexible, removable build plate is two-sided, too. All you need to do is flip it over to switch between easy materials and tougher materials. Additionally, there are two different spool holders, outside or inside the printer if you need a completely closed frame. 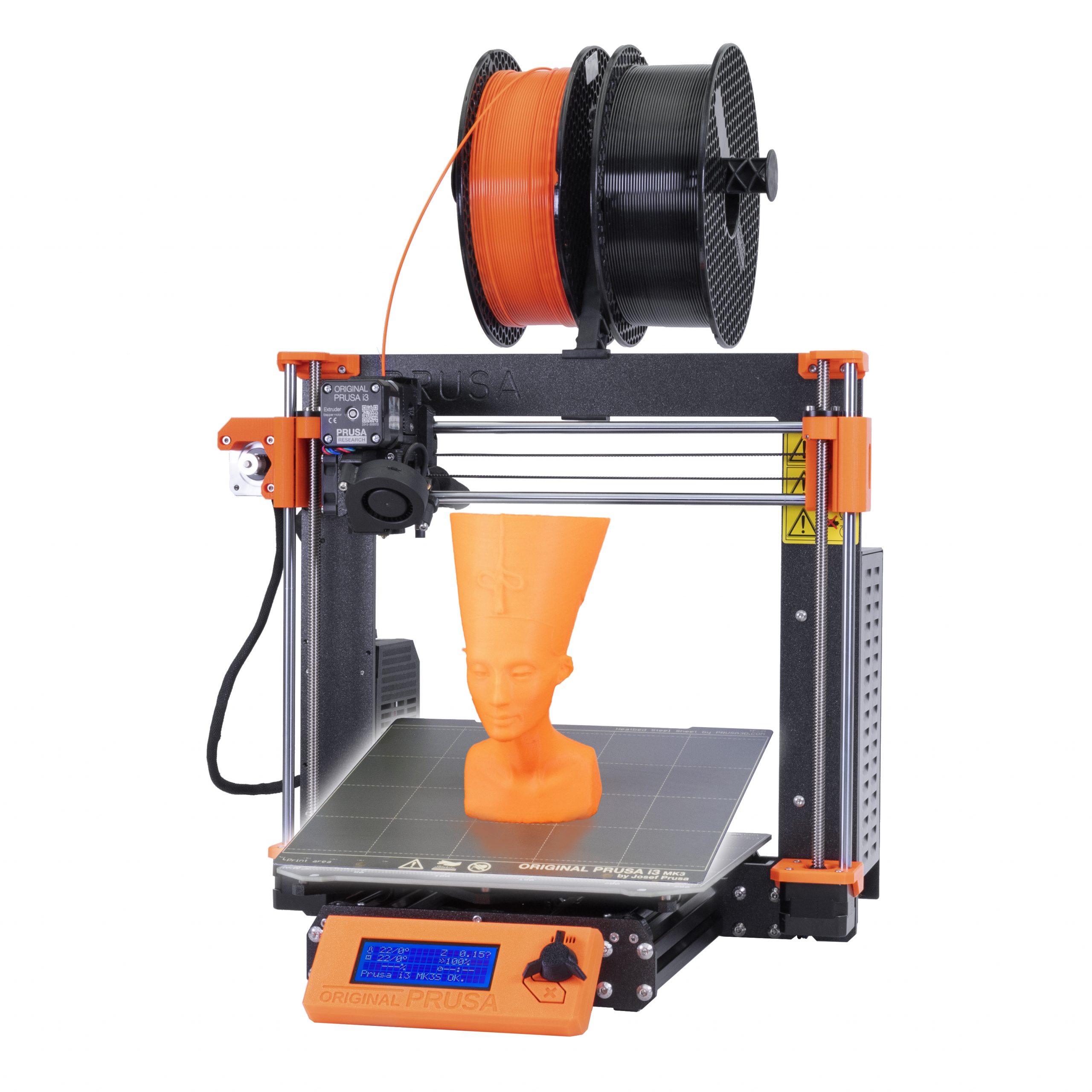 The Original Prusa i3 series has been a best-seller worldwide for years. Prusa Research focuses on quality and support, and their award-winning open source printers have been thoroughly praised by the community.

The MK3S was released early 2019 and is the most up-to-date version of the Original Prusa i3. It’s equipped with numerous features, including a magnetic print bed with swappable sheets, a range of sensors (filament, shifted layers, skipped steps, temperature drifts, etc.), and high-quality components.

A multi-material upgrade is available to allow 3D printing with up to 5 different filaments at a time. It isn’t full-color 3D printing, but it can definitely spice prints up.

Buy on Prusa Add to comparison 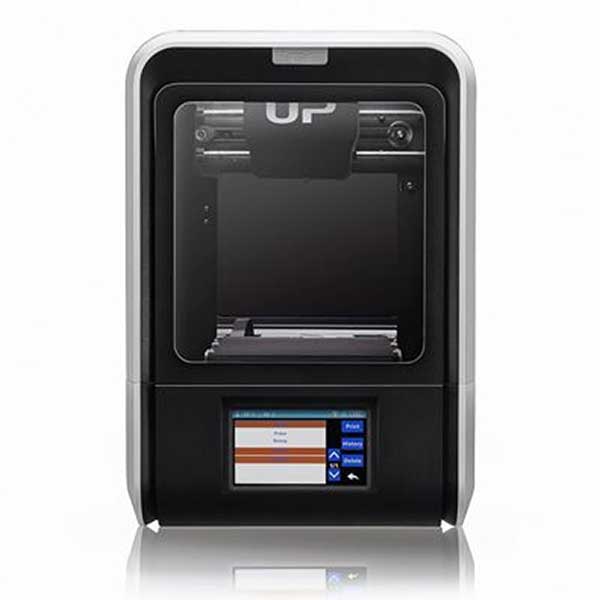 For a $599 3D printer, the UP mini 2 ES is a very capable machine with plenty of user-friendly perks. It offers automatic leveling and material detection, and its interchangeable build plates make it easy to remove finished prints.

Although its build volume is a bit small compared to current standards, it does provide a great performance, especially with ABS prints. Its frame is closed to maintain a warm interior environment and its air filter helps reduce the amount of particles released in the air.

Also, you can open it from the front or back doors, and there are two magnetic lids on top as well. 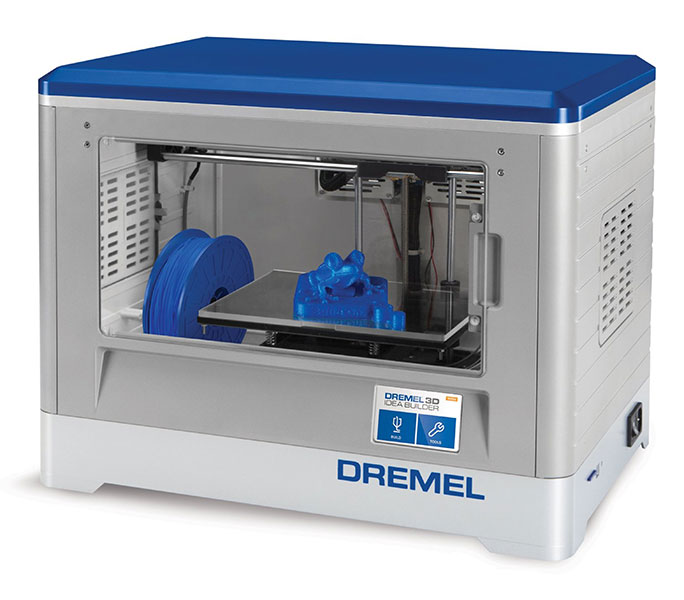 The award-winning Dremel DigiLab 3D20 (Idea Builder series) has been on the market since 2014 and remains to this day a staple educational 3D printer. It is a reliable, plug-n-play workhorse that will last you several years.

The Dremel 3D20’s closed frame and non-heated print bed make it safe enough to use in the classroom. That also means that it’s only able to print PLA-based filaments.

Hence, although it’s an excellent 3D printer for beginners, it may not be versatile enough for more advanced users who will quickly outgrow it. 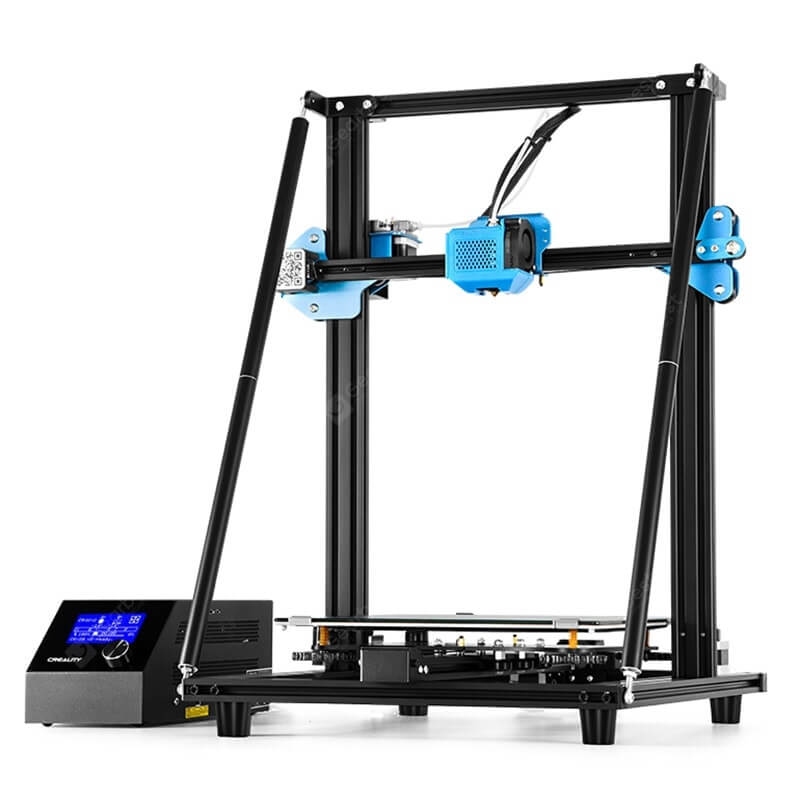 If you’re in the market for a 3D printer with a large build area, the CR-10 V2 may be just what you’re looking for. In addition to providing a large print size, it’s equipped with a number of user-friendly features that make it easy to use (even if it isn’t exactly a plug and play machine).

Those features include a filament sensor, a pause and resume function that works in case of a power failure, and optional automatic bed leveling that you can order separately and install yourself.

The Creator Pro, another well-established and award-winning classic, is one of the few 3D printers in this price range to offer dual extrusion. It’s capable of printing a wide range of materials, from PLA to ABS and flexible filaments.

Aside from its dual extruder, the FlashForge Creator Pro is pretty basic with a heated print bed and a regular LCD screen. The relative lack of features– which is mainly due to the fact that the printer was released in 2016– doesn’t stop it from providing a reliable performance. 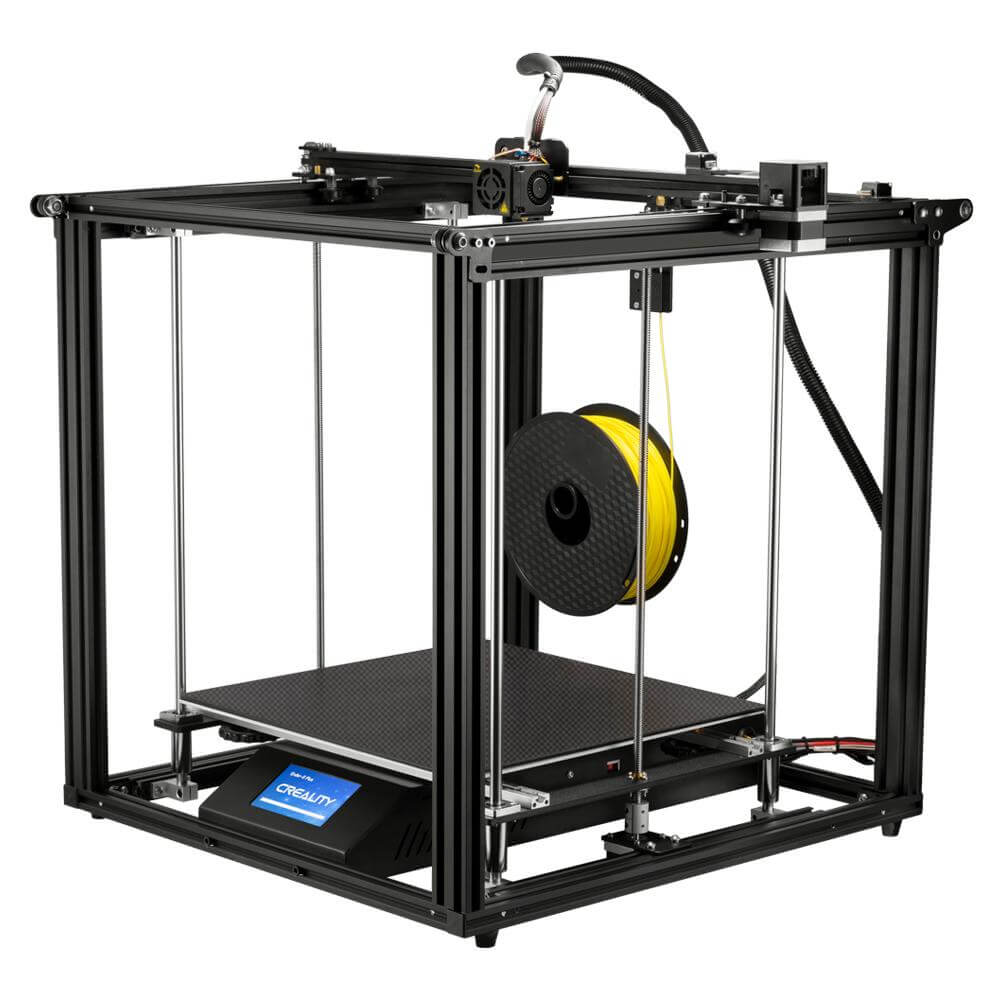 Creality is a Chinese manufacturer that finds a place in many of our rankings and product selections. Their Ender 3 is in our selection of 3D printers under $300, and their standard Ender 5 printer is part of our “3D printers under $500” guide.

This particular Creality 3D printer offers a super-sized build volume, so you can print huge objects or various smaller models in one go. It comes as a semi-kit which means you’ll have a few assembly steps to follow before being able to use it.

The Ender 5 Plus boasts auto-leveling, filament detection, and a large touchscreen. 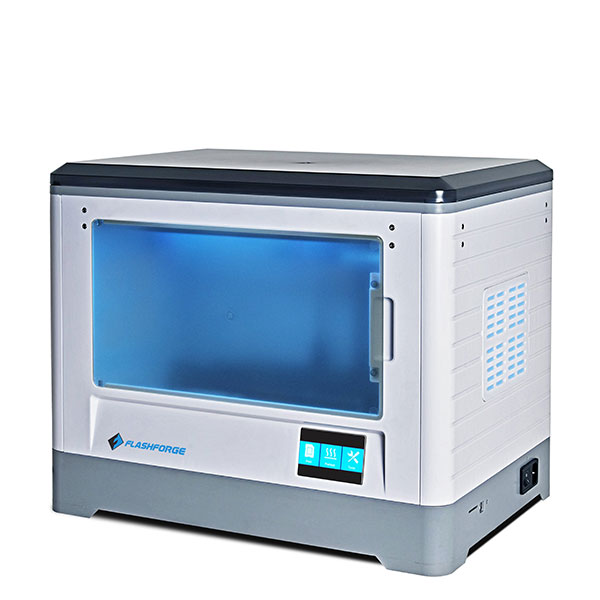 You may be thinking that this printer looks pretty similar to the Dremel 3D20, and you’re right. The 3D20 is actually a kind of rebranded version of the FlashForge Dreamer. However, the latter provides a bit more functionality.

The FlashForge Dreamer is compatible with PLA filaments and ABS filaments. 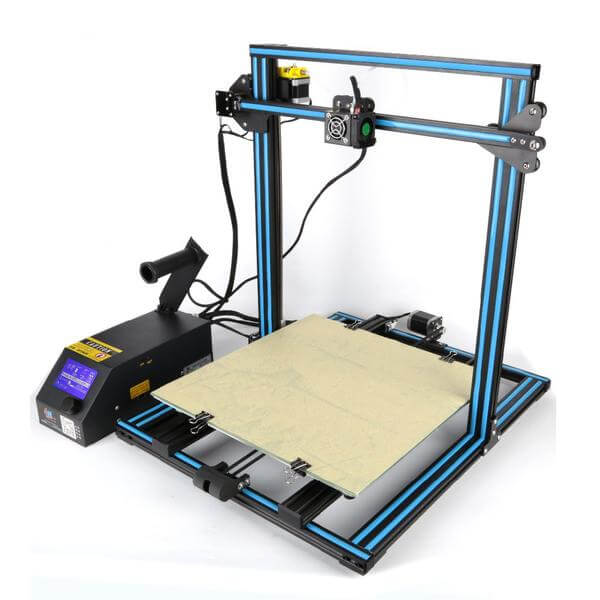 The CR-10 S5 is currently the largest 3D printer you can find for under $1,000. It doesn’t have a touchscreen or automatic bed leveling like higher-end printers do, but it’s a fair deal considering the huge build volume it provides at this price.

This 3D printer does have other cards up its sleeve, like a heated and removable bed, an auto-resume feature, and a filament detector.

It comes as a semi-kit to be assembled in a few quick steps.

These are some of the things you should take into account when deciding on which 3D printer to buy.

Your printer’s maximum build size will, obviously, determine how big your prints can be. Keep in mind that the bigger your prints are, the longer they’ll take. Even small prints can require a few hours, so for a big 3D model, you may be looking at a few days worth of printing.

For an idea of what can be printed, take a look at some of these sites where you can download STL files for free. Note that if your build volume is too small, it’s possible to “cut” models into separate 3D printable files and glue them together after.

PLA is the most common kind of plastic you’ll find to 3D print. There’s an incredibly wide range of colors and types available, from glittery rainbow gradients to glow-in-the-dark filaments. This material is also the cheapest and doesn’t require a heated bed (even if it does help for first layer adhesion).

If you want to go beyond PLA filament, for example, if you want to print flexible TPU or strong ABS, you’ll need a heated print bed. Ideally, it’s also best to have a closed frame for these materials, to protect your prints from room drafts. You can still go for an open printer though and make a frame yourself. Even cardboard can do the trick!

For abrasive materials like Carbon-fiber-filled Nylon, your nozzle must be reinforced. A brass nozzle can be damaged with just one abrasive print. It’s possible to order new, suitable nozzles online if your printer doesn’t come with one.

Almost all 3D printers under $1,000 boast similar specs. Minimum layer thicknesses are typically around 0.1mm, or 0.05mm for some. The thinner your layers, the better your prints will look, and the longer they’ll take to print, too.

Users tend to print thicker layers anyways to get their prints done more quickly, as the difference isn’t too noticeable. In slicing software, you can see various layer profiles; “draft quality” is around 0.2mm, for example.

Maximum print speeds are also quite similar from one printer to another in the sub-1000 price range. They’re generally between 120 mm/s and 180 mm/s, but at those speeds, you’re losing precision and print quality.

3D printing still has a long way to go before it’s truly plug-n-play, even with professional or industrial 3D printers.

However, there have been many advances in the past years. Here are a few key features that can make printers more user-friendly:

Some printers come fully assembled, or only require you to plug in the print head, for example. However, the majority of affordable 3D printers come as kits that you need to assemble yourself.

Kits used to be complex and time-consuming to assemble for beginners (shoutout to the Anet A8 kit), but today they mainly come as semi-assembled kits. That means that most of the complicated parts are already assembled and you only have to put together the frame. This shouldn’t take more than an hour of your time.