What is 3D metrology?

3D metrology is the process of acquiring highly accurate physical 3D measurements of an object. The result is a digital 3D model that can be analyzed or retro-engineered.

In the case of quality inspection, for example, the 3D scan can be compared to a reference CAD model to make sure the object respects established norms and standards. 3D metrology helps ensure product quality while saving time and, thus, lowering costs.

CMMs– coordinate measuring machines– have traditionally been the most common type of hardware used for precision measurement. However, advances in 3D scanning technology are making 3D scanners increasingly popular for metrology as well, as they are faster and more cost-effective.

In this guide, we offer a comprehensive overview of some of the best metrology 3D scanners available on the market, covering different types of hardware (stationary, handheld) and price points. We also provide basic insight into 3D metrology software, which is as equally important as the hardware side of things.

The best metrology 3D scanners in 2022

Using a handheld 3D scanner is comparable to recording a video or painting with a brush; the subject must be captured from all angles.

A stationary 3D scanner is similar to a camera on a tripod. For small or medium-sized objects, these scanners are usually paired with an automatic turntable for smoother workflows.

Stationary scanners are often more accurate solutions due to their fixed setup but are impractical for large objects or infrastructures.

Automation in metrology with robotic arms

Many metrology 3D scanners, mostly in the stationery category, are designed to be mounted onto an industrial, robotic arm depending on specific needs.

Overview of the best 3D scanners for metrology in 2022

Here we provide a deeper look into each metrology 3D scanner from our list.

This lightweight metrology 3D scanner serves a wide number of industrial and professional applications such as quality control, reverse engineering, product design, and more. It is capable of scanning shiny, dark surfaces and is easy to use, as we witnessed firsthand.

Users may opt for the Creaform MaxSHOT CMM add-on to complement the HandySCAN’s performance.

Contact manufacturer Get a quote Add to comparison
Selection Tested

The GOM ATOS Q is the manufacturer’s mid-level metrology 3D scanner. It uses blue structured light and benefits from GOM’s latest optical sensors and technology, providing industrial-grade results in a compact device. According to GOM, the scanner is able to capture difficult textures such as shiny, reflective surfaces.

Five different lenses are provided in order to adapt the scanner to objects of different sizes.

This 3D scanner comes with the GOM Inspect Suite for metrological applications and can be operated on a tripod or mounted onto a robotic arm for full 3D scan automation.

The KSCAN-Magic by ScanTech offers a highly flexible measuring range, being able to scan parts as small as a coin as well as large objects such as cars. It also features three different scanning modes; one for speed (11 blue laser crosses + an extra line), one for higher levels of detail (7 blue parallel laser lines), and one for large objects (11 infrared lines).

A probing CMM accessory is available for holes, planes edges, hidden points, and other geometries where marker placement isn’t possible.

The ScanTech KSCAN-Magic comes with proprietary ScanViewer software, which includes a variety of functionalities such as pipe measurement, hole and deformation detection, edge inspection, and more. 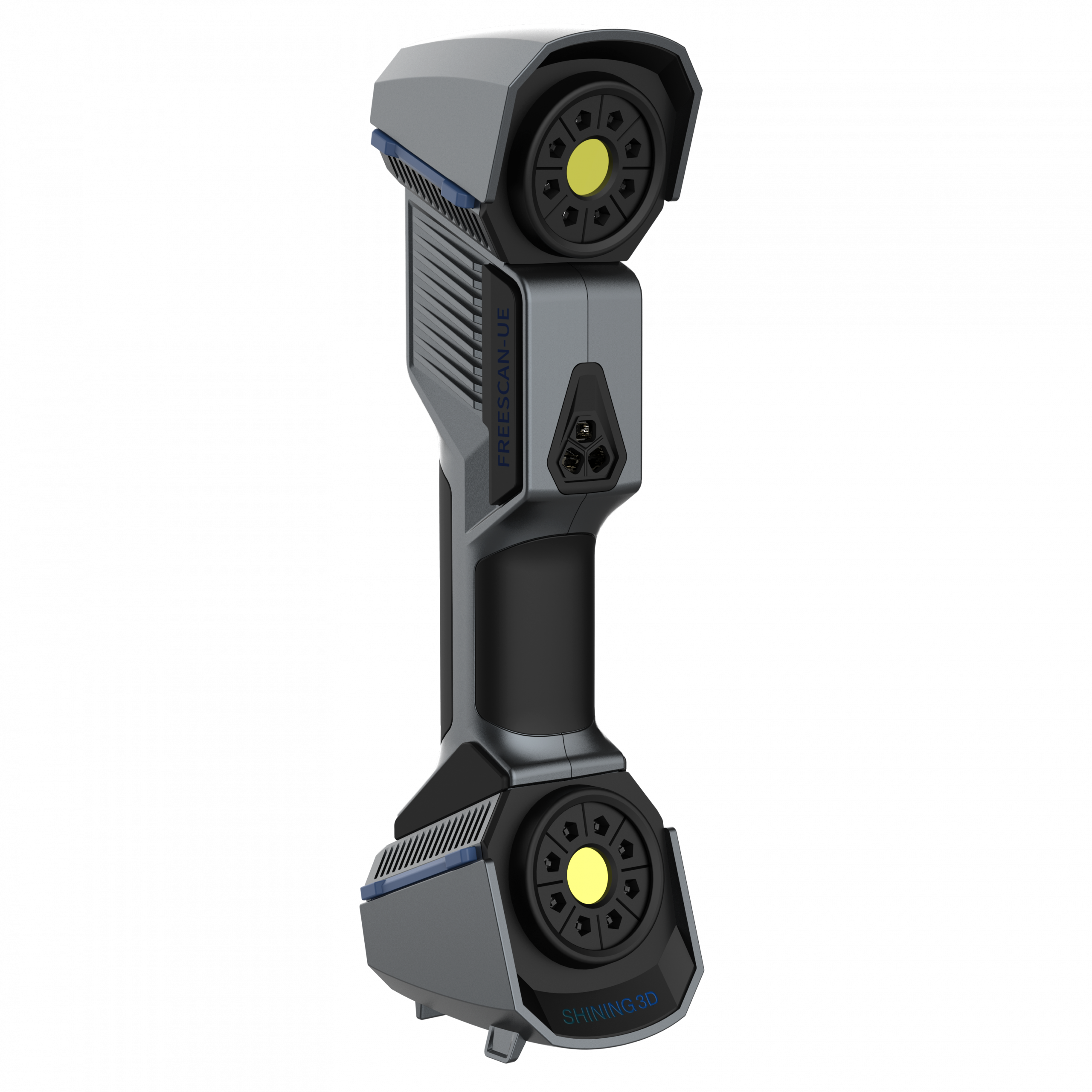 The Shining 3D FreeScan UE is a professional handheld 3D scanner by Shining 3D, a leading Chinese 3D printer and 3D scanner manufacturer. It is a follow-up to the existing FreeScan X series, which includes for example the FreeScan X7.

This blue laser-based 3D scanner offers metrology-grade precision and repeatability, all while being able to scan difficult surfaces in a wide range of environments and industries.

The eviXscan Heavy Duty Quatro is one of the most robust 3D scanners on the market. Its dust-proof, oxidized aluminum casing is suitable for a wide range of environments, from underground mines to factory floors.

Two scanning ranges are available to adapt to both medium and large-sized objects, and three different colors (R/G/B) are available for the LED light source.

The Artec Space Spider has been one of the leading 3D scanning solutions for several years. It offers metrological accuracy for parts as small as 5mm and complex, intricate details and its 1.3 MP texture camera offers full-color 3D scanning capabilities.

This lightweight (0.85 kg) 3D scanner can be used with a battery pack, lasting for up to 6 hours on one charge. Interestingly, this scanner was originally designed for the International Space Station, and is therefore able to withstand environmental fluctuations while maintaining its level of accuracy. 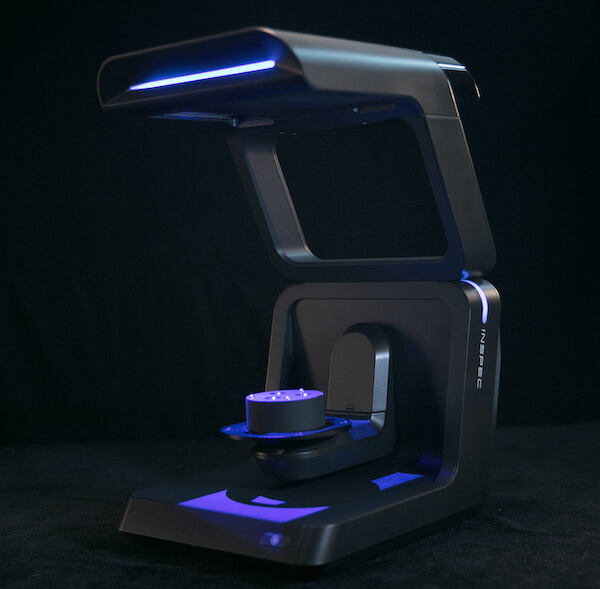 Shining 3D has been producing 3D scanners and printers since 2004, entering the market by offering more affordable solutions than what was traditionally available.

The Polyga Carbon is equipped with dual 3 MP cameras and boasts an adjustable field of view to adapt to different object sizes. An XL version is available as well for even larger objects and more flexibility.

For our main selection, we didn’t include high-end systems that are destined for heavy industrial applications. They can’t be compared on the same level as the scanners from our main list, whether it’s in terms of accuracy, pricing, software, or automation.

CMM stands for coordinate measuring machine. This type of device uses a probe- either a physical, surface-touching probe or a light/laser source–to measure an object’s geometry. CMMs can be operated manually or computer-controlled.

These machines are highly accurate but are relatively slow at capturing data and only acquire a certain amount of points. A standard CMM captures several hundred points, in contrast to 3D scanners which acquire hundreds of thousands or millions of points.

Hence, CMMs are mostly used for targeted inspection rather than for providing full 3D models of objects, in which case 3D scanners are the best option.

The main advantages of 3D scanners over CMMs are:

All of this being said, CMMs and 3D scanners can be complementary. CMMs are hard to beat when it comes to measuring holes and complex, intricate details.

By using both a CMM (such as a handheld probe) and a 3D scanner, it is possible to reach a high level of accuracy.

Which industries use metrology and why?

Integrating 3D metrology directly in the value chain of any industry ensures high part quality without interrupting the production line.

These are some of the many industries that take advantage of 3D metrology:

The top application for 3D metrology is part inspection within general quality control processes. It is essential for any business to oversee that their manufactured goods are up to standard.

This is true whether these goods are simple household objects, like a microwave knob, or crucial airplane parts that must be 100% standard and safe.

A 3D scanner is only as good as the software it works with. For clarity, we can distinguish two kinds of software:

This can be sufficient depending on the end-use of the scan, but when it comes to metrology, additional software is often needed.

In most cases, manufacturers either provide their own software or recommend third-party suites.

Of course, there are exceptions to this distinction. Some manufacturers directly include inspection-type functionalities within their base software, like ScanTech with ScanViewer.

Conversely, sometimes inspection software is capable of serving as base software by importing and processing raw 3D scanning data, too.

An overview of 3D scanning for part inspection

Metrology and inspection software prices are quite high, sometimes even higher than the hardware itself. They can cost anywhere from several thousand dollars to over $30,000 and are not always included in the 3D scanner’s price, so it is something to watch out for when choosing a scanner.

If you already have a license for a specific inspection software suite, you can also check which scanners are compatible with it.

What specifications to look for in a 3D scanner?

There are several specifications to look into before purchasing a 3D scanning solution for metrology.

Accuracy defines how close the actual object is to its virtual reference copy. This is of utmost importance for metrology applications.

3D scanners use different kinds of light sources to capture 3D images: laser lines and crosses, which are typically red or blue or LED light patterns, which are usually white or blue.

Generally, the more lines or lasers a 3D scanner has, the faster it will be at 3D scanning.

Resolution is either measured in point-to-point distance or in points per scan.

As is the case with images, the higher a scan’s resolution is, the more details will be visible and the crisper the results will be.

It may at times be unclear which resolution manufacturers are referring to in their product specifications.

Data acquisition speed can be expressed in point measurements per second, frames per second, or seconds per scan.

Some 3D scanner manufacturers develop their own software, while others have partnerships with existing, leading 3D scanning software brands.

It is also important to keep in mind that 3D scanning software always requires powerful laptops in terms of RAM, graphics cards, etc. If you are not well equipped, you may need to allocate several thousand dollars of your budget to a new PC.

Range and field of view

Evidently, it is inefficient to 3D scan a large object with a 3D scanner that has a small range or field of view. Hence it is mandatory to see if a scanner’s range is compatible with what you are planning on 3D scanning.

Markers are small, adhesive “targets” that aid 3D scanners in positioning the data that they have acquired. In other words, they help the scanner align the different captured frames together, relatively to each other and in space, to form the 3D model.

In order to enhance their global accuracy, a number of structured light or laser 3D scanners integrate marker acquisition with photogrammetry technology, through dedicated cameras.

They are “hybrid” 3D scanners, explaining why some metrology 3D scanners require the user to place markers on the object to be scanned or its environment, especially for large-sized objects (over 1 meter).

The price for a metrology 3D scanner largely depends on its accuracy, software, and other factors. For heavy industrial applications, the price for an appropriately accurate scanner and software can go well over $100,000.

For less demanding use cases, the price for an entry-level metrology 3D scanner can start at around $15,000.

How much is a 3D scanner?

How accurate is 3D scanning?

Currently, accuracy can get all the way down to 0.004 mm- 16 times thinner than an average human hair.

What is the maximum size of objects you can 3D scan?

The maximum scanning area depends on the scanner itself. Keep in mind that the bigger the scan, the less accurate the result will be (linearly).

Can I do metrology with a handheld scanner?

It is possible to do metrology with a handheld 3D scanner. For repeated industrial applications, however, stationary or automated scanners are preferable.

How much time does it take to 3D scan an object?

Depending on the 3D scanner’s speed and the object’s complexity and size, it can take anywhere from less than a minute to several dozen minutes. Software processing adds a bit of time to the total.

Can I scan shiny objects? Can I scan dark objects?

Shiny and dark objects are hard to 3D scan, regardless of the 3D scanner’s quality. Special sprays and techniques exist to overcome this obstacle.